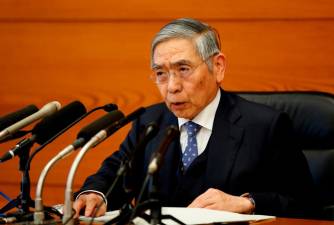 Kuroda said the world's third-largest economy was picking up, sticking to the BOJ's optimistic view even as an expanded state of emergency declared on Wednesday heightened fears of another recession.

"Japan's economy is likely to improve as a trend as the impact from the pandemic gradually subsides, although the pace will be moderate as caution over COVID-19 persists," Kuroda told a quarterly meeting of the BOJ's regional branch managers.

"The BOJ will scrutinise the impact of the pandemic for the time being and stand ready to take additional easing steps without hesitation if needed," he said.

The remarks came ahead of the BOJ's two-day policy meeting next week, when it will issue fresh quarterly growth forecasts.

Sources have told Reuters the BOJ is likely to slightly revise up its economic forecast for next fiscal year on hope the government's stimulus package will moderate the pain from state of emergency measures to combat COVID-19.

Having already extended a raft of measures last month to ease funding strains for firms hit by the pandemic, the BOJ is expected to hold off ramping up stimulus at the Jan. 20-21 policy meeting, the sources said.

After suffering its worst postwar contraction in April-June last year due to lockdown measures to combat COVID-19, Japan's economy has been recovering thanks to solid exports and robust domestic demand for durable goods.

But consumption is likely to take a hit from the government's decision to expand a limited state of emergency in the Tokyo area to seven more prefectures, as infections remain around record levels. - Reuters